My Dragoncon 2012 fangirl experiences - Plus, a coupon code for Carina Press!

I'm back from DragonCon in Atlanta, and although I am sore, exhausted and a little bummed that it's over, I'm happy to share my experiences. Let me just say that while you can experience DragonCon in a day (which I've done twice now), I think you could go for all four days and still not do everything you wanted. Next year, fingers crossed, I'll go for multiple days. 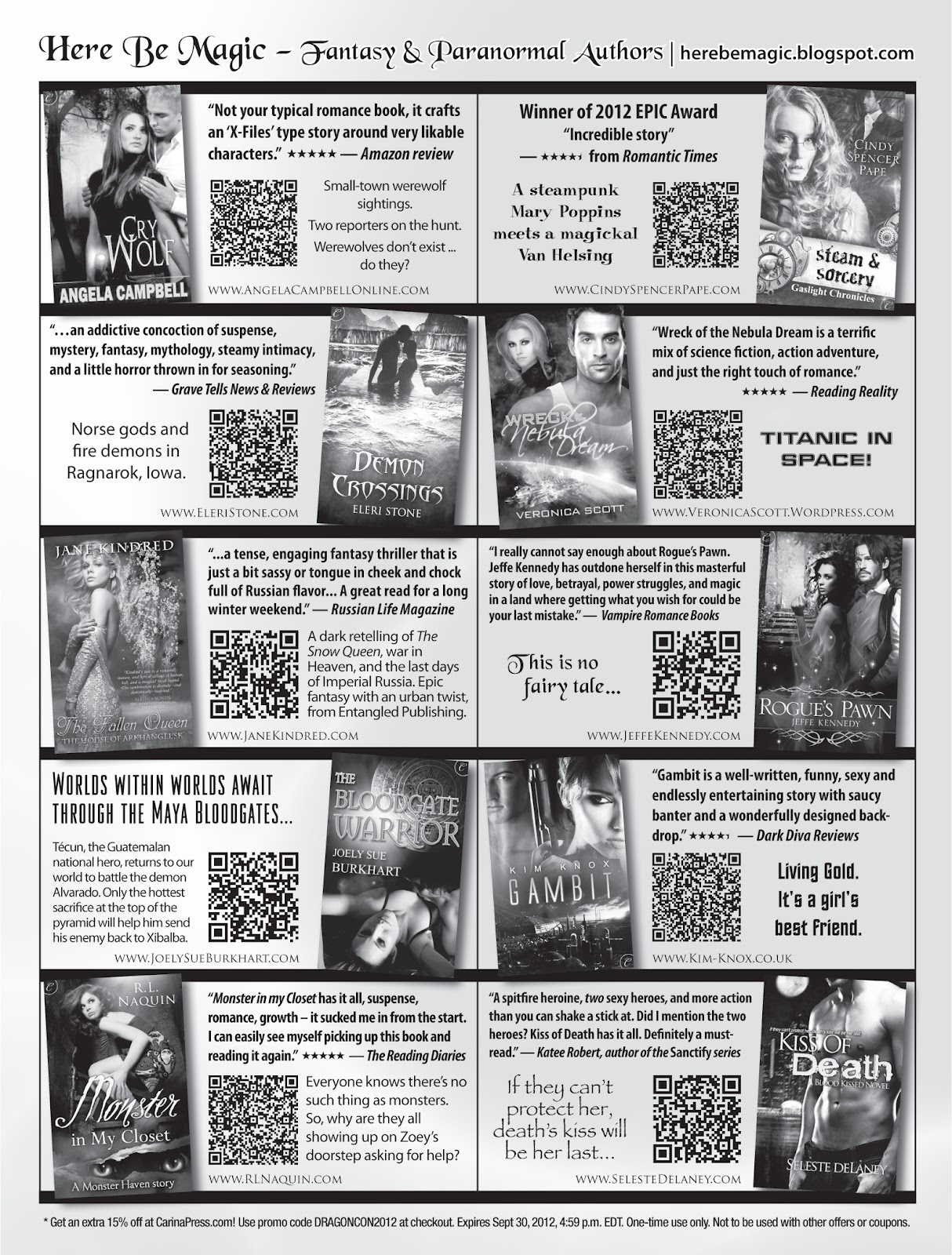 Before I launch into my fangirl diary, I want to share that several Carina Press authors got together and bought an ad in the DragonCon program. Better yet, there's a DragonCon promo code in the ad that I'm going to share here. Get an extra 15% off at CarinaPress.com! Use promo code DRAGONCON2012 at checkout. Expires Sept 30, 2012, 4:59 p.m. EDT. One-time use only. Not to be used with other offers or coupons. To see our ad, click on the image at right. The titles featured are CRY WOLF by me (contemporary with a hint of paranormal), STEAM AND SORCERY by Cindy Spencer Pape (Steampunk), DEMON'S CROSSING by Eleri Stone (paranormal/fantasy), WRECK OF THE NEBULA DREAM by Veronica Scott (sci-fi/fantasy), THE FALLEN QUEEN by Jane Kindred (paranormal/fantasy), ROGUE'S PAWN by Jeffe Kennedy (fantasy), THE BLOODGATE WARRIOR by Joely Sue Burkhart (paranormal/fantasy), GAMBIT by Kim Knox (sci-fi/fantasy), MONSTER IN MY CLOSET by RL Naquin (fantasy), and KISS OF DEATH by Seleste Delaney (paranormal).  Not all titles listed are Carina books, but the authors all have books with Carina Press, which is where the coupon is valid. Show some love and give one of these books a try!

First of all, while I had three writing panels on my schedule, I have to confess I didn't make it to a single one. I was having too much fun being a groupie. Yes, I admit it. I love the celebrities that come to DragonCon. It's the one place I can totally fangirl out over lots of people I'd never have the chance to meet otherwise.

I started my day by trying to make Stan Lee's panel, but I was stuck in  registration line hell forever, so I went straight to the Hilton, picked up tickets for a photo opp with Ian Somerhalder (Vampire Diaries, Lost) and then headed over to do a photo with Joe Manganiello (True Blood). I met Joe last year at DragonCon and vowed to get a picture with him simply because he's taller than my own 6'2" and not many celebs are. OK, and because he's hot. Whew, he's hot. And I touched him. And he touched me. Unfortunately, the touching only involved wrapping our arms around each other for a photo, but still. I'll take what I can get. I think my picture with Joe is the only one I've ever taken with a celeb where I didn't feel extraordinarily self conscious because of my colossal size. I actually felt normal with him, which is further proof we should marry. But I digress.

Then it was back to meet Ian and grab a photo with him. His line was so long, they had us packed in a room like sardines. I met some interesting people in line. A girl dressed like -- I think -- Rainbow Brite chatted with me for the hour we stood waiting. Yes, the worst part about DragonCon are the darn lines. Almost worse than Disney on a holiday. But I finally met Ian, he gave me a big hug, and he said, "What's up Superwoman?" which totally thrilled me until I remembered I was wearing a t-shirt with the Superman logo on it. Yes, his charisma rendered me braindead for a few seconds. I only wish he were taller because I felt like Ginormica hugging him back. But I still love him. LOVE him.

Most of the guys from "The Vampire Diaries" were there. I ran into Joseph Morgan in the hall as he was walking to wherever. I tried to chat him up, but he must have been in a hurry. Klaus, his dad, his brothers, they were all there. Jeremy had to cancel his signing, but I lucked out and met him by accident while I was in Atlanta, and he was extremely nice and funny and didn't seem to mind I had stopped him to chat.

After meeting Ian I rushed over to catch the Gillan Anderson (X-Files) panel because The X-Files is possibly my all-time favorite show. In college, I wrote a paper on Agent Scully and her epic awesomeness that earned me an A in my most difficult class. For that alone, I still want to hug Gillian Anderson. She literally helped me graduate. She told some funny stories about the strangest X-Files fan she's ever met -- a woman who claimed to be an alien who also claimed she could pick up objects with her um, private parts, and fling them across the room -- and confirmed that X-Files creator Chris Carter is writing a script for a third movie (but Fox has to give approval to greenlight it). 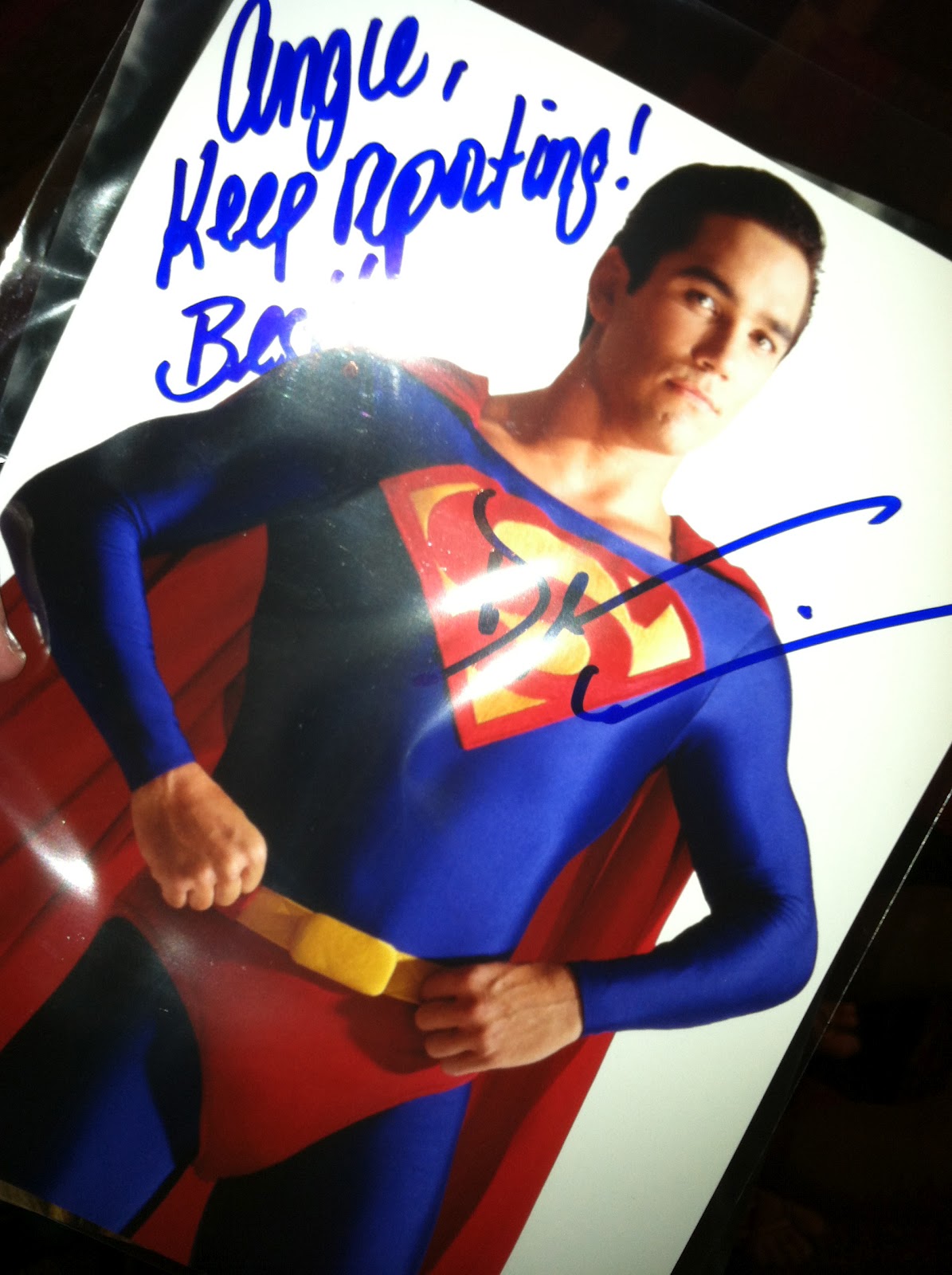 Then it was back to meet up with my two friends who drove in late (slackers), and we went to the Walk of Fame, which is where the celebs sign autographs. I immediately zeroed in on Dean Cain, because when I started college as a journalism student, "Lois and Clark" The New Adventures of Superman," was a favorite and helped reconfirm that I wanted to be a reporter. It's true. Jack and Jennifer from "Days of Our Lives" and Lois and Clark are to blame for my choice of profession. I've always been impressionable like that, and I am the biggest Superman fan ever. So I dragged my friends Daniel and James over to his line so they could take my picture with Dean, but then I saw he was charging $40 to take a picture with him. Darn. I opted not to do a picture, but I got his autograph. When I went up to him, I reverted to being a schoolgirl again and asked for a hug. He happily grabbed me up in one -- Dean is a big guy too -- and squeezed real hard. Or maybe I squeezed real hard. Or does it even matter? We hugged. And then I blubbered that I was a newspaper reporter, in parts thanks to him, and he said, "Get out of here! Really?" And then he asked me a bunch of questions about newspapers today and how much they've changed since he played a reporter. And we talked about how weird it is to imagine Lois and Clark not working for a newspaper and working for an online outlet instead, and then he stood and hugged me again, and thanked me for telling him that! I think he gave me the coolest autograph ever. And I have two witnesses that Dean Cain hugged and chatted with me. No picture though. I kind of regret that now. Oh well.

After that I had planned to get to "The Walking Dead" panel, but I was told Gillian Anderson would soon be signing autographs and she was on a tight schedule. So I popped over to wait, yet again, in another line. When I finally got up to her, she politely thanked me for coming and I blabbered, starstruck, that I thanked her for coming and that she helped me graduate. I'm pretty sure she thought I was whacko, but she was polite.

After that, my friends and I met up again to eat at the Hard Rock Cafe, and I fangirled over all the Elvis stuff there. I think someone had flipped my FANGIRL button that morning, so I was fangirling over everything. We separated again, and I went back to the Walk of Fame because my No. 3 target for the day was actress Felicia Day. Who? Oh, you poor dears. Felicia is kind of my role model. She is known for starring on Buffy, Eureka and a hilarious guest appearance on Supernatural, but among many things, she is a Gamer Queen and one of the most famous web personalities alive. She co-founded Geek and Sundry, which is a Youtube channel, and the Vaginal Fantasy Hangout book club, which is both hilarious and awesome. Go watch one and see. They chat about romance fantasy books they read, in a side-splitting fashion. They were all at DragonCon doing a panel, but of course, I missed it.

To my surprise, the entire cast of The Guild was there, and so was Felicia. I got in line, and I was literally the last person in line (and it was a massive, massive line) before they capped it. I chatted with the nicest Felicia Day fangirl in front of me for the longest time about what a great role model she is, and Felicia's personal assistant came over to talk to us and she was super awesome too. I felt bad because I couldn't afford the entire Guild's cast autographs, but I told them I loved them, and Sandeep Parikh said, "You know what's free? High fives!" And the entire cast high-fived me as I made my way to Felicia. So much fun. She was happy to take a picture with me for free, and I think she could fit in my pocket, she's so tiny. And nice. Felicia Day is the nicest gal. Period.

Anyway, I mingled around after that, taking pictures of cosplayers (people in costume), and then headed to check out the premiere of Felicia's new movie, Rock Jocks. Again, a long line in the Atlanta heat, but I made some new friends in that line. I've never been so glad to sit for two hours in my life. The movie was funny. Kind of too much bad language for my taste, but really funny. 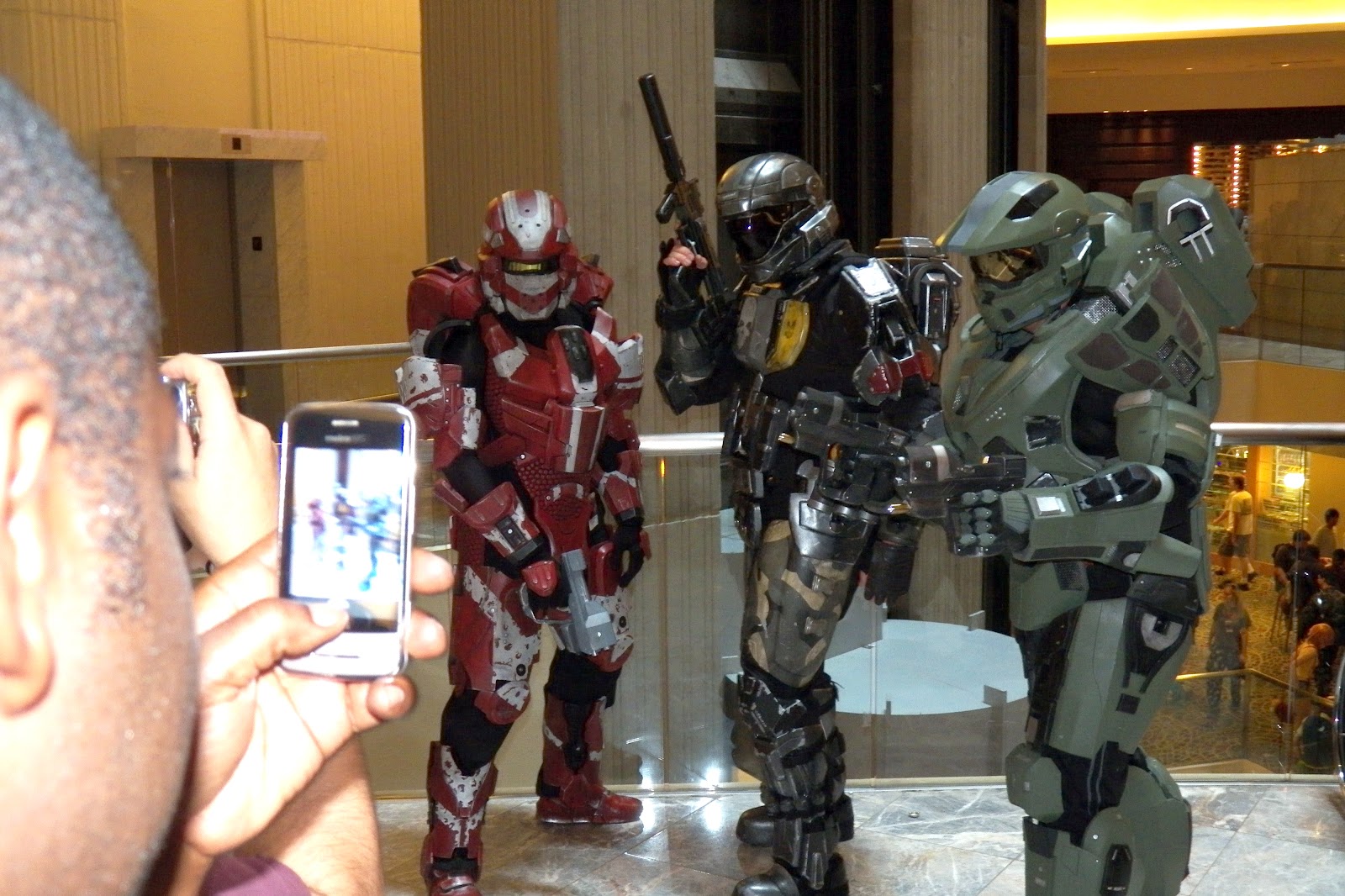 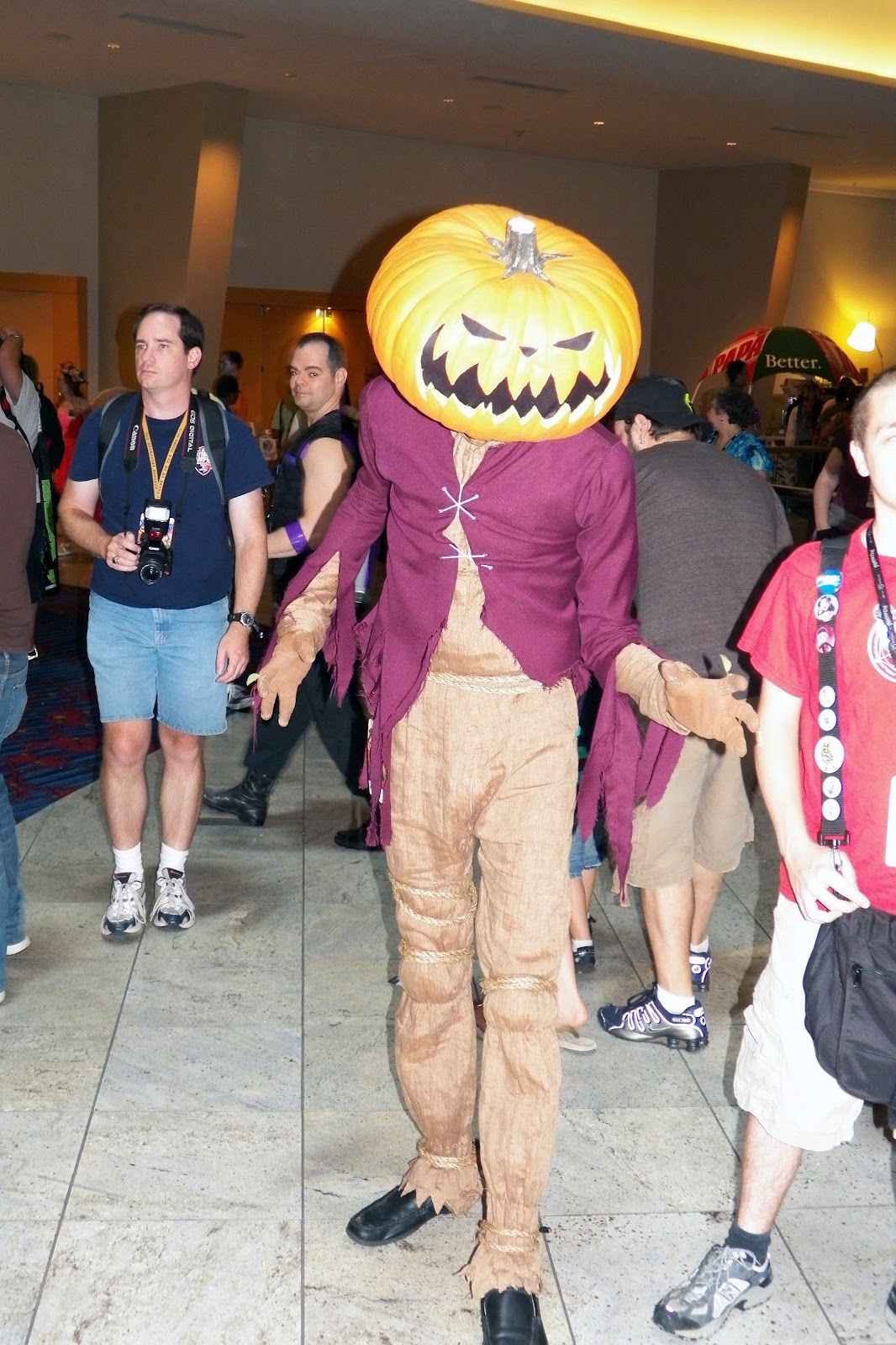 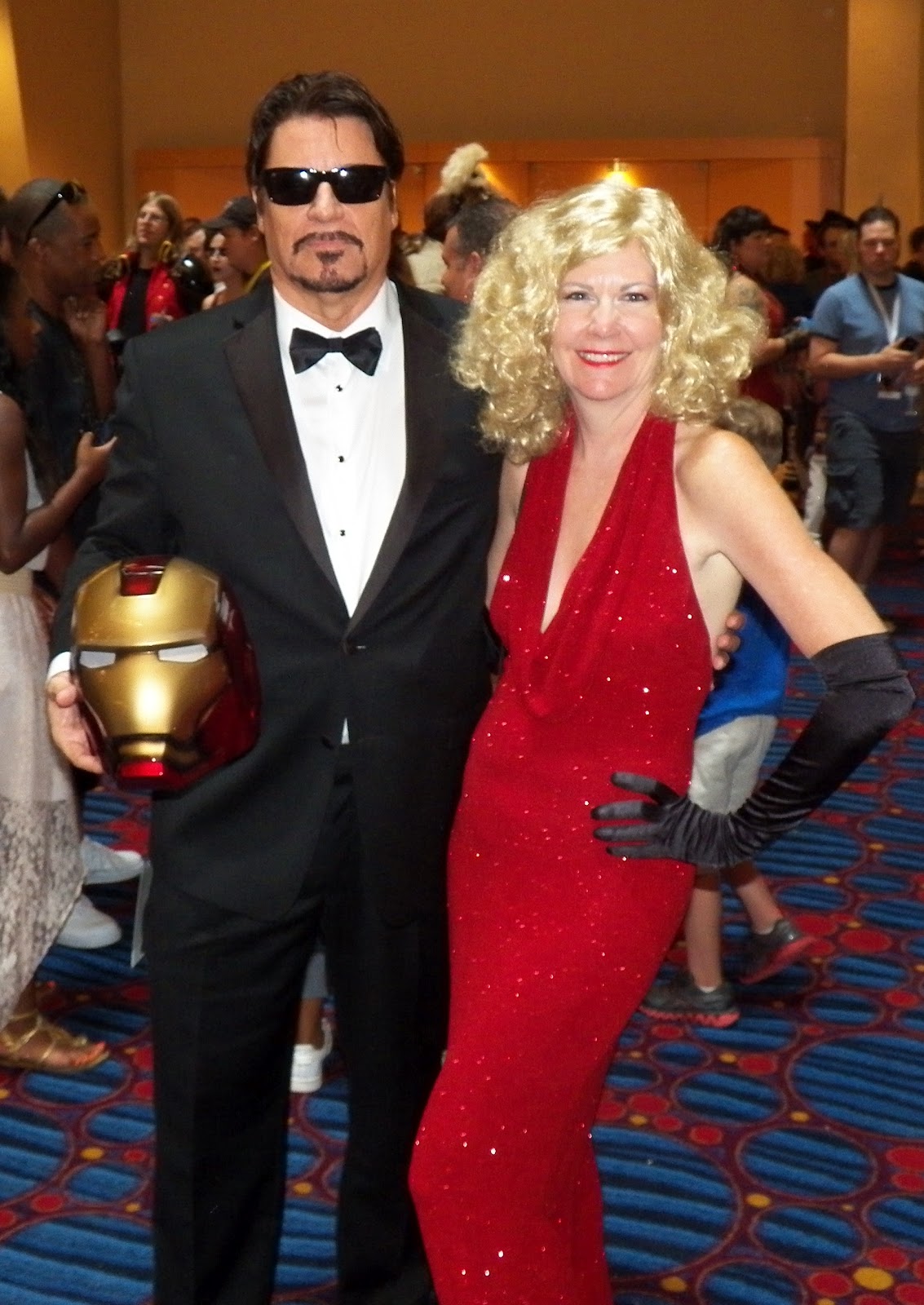 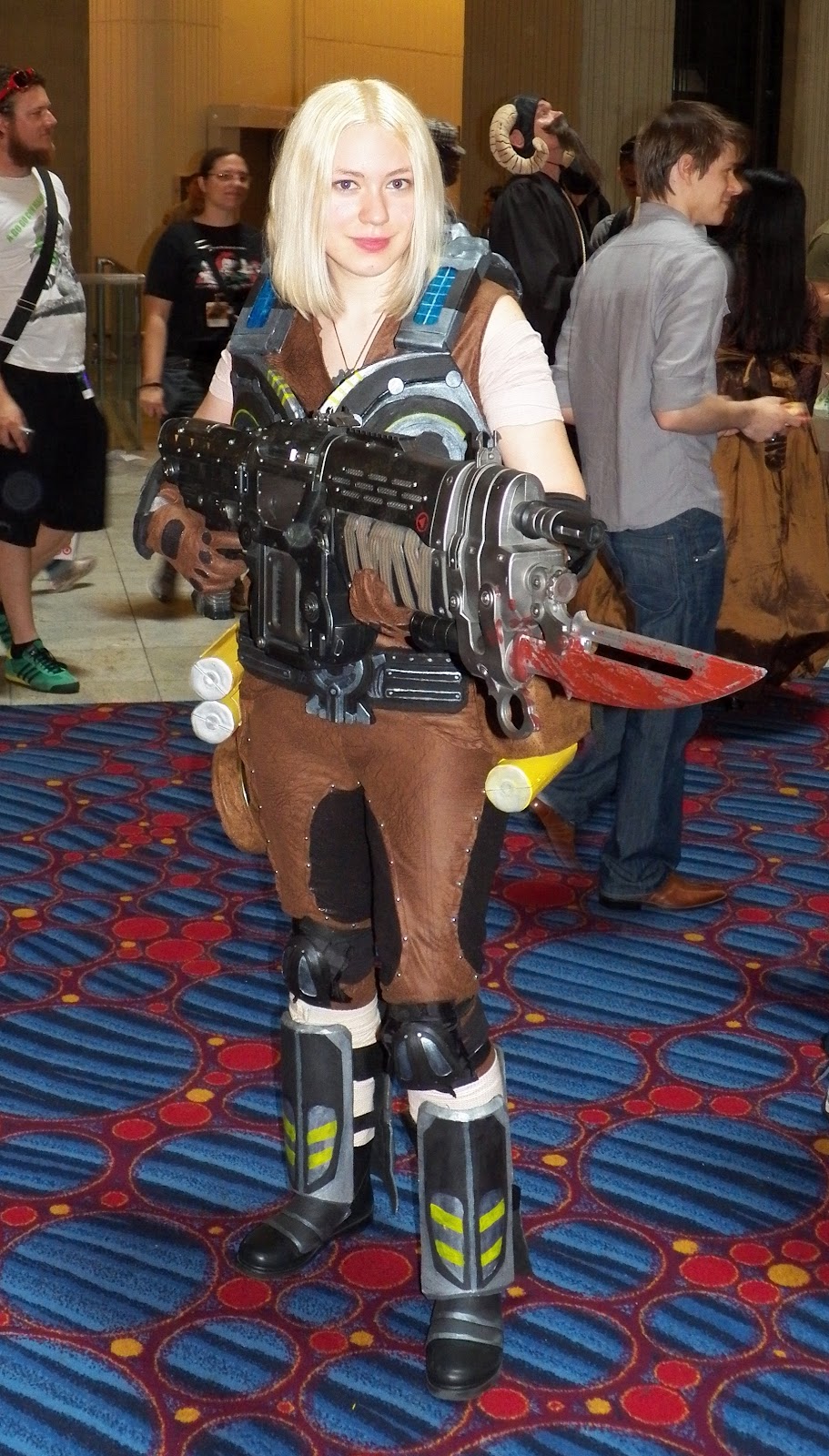 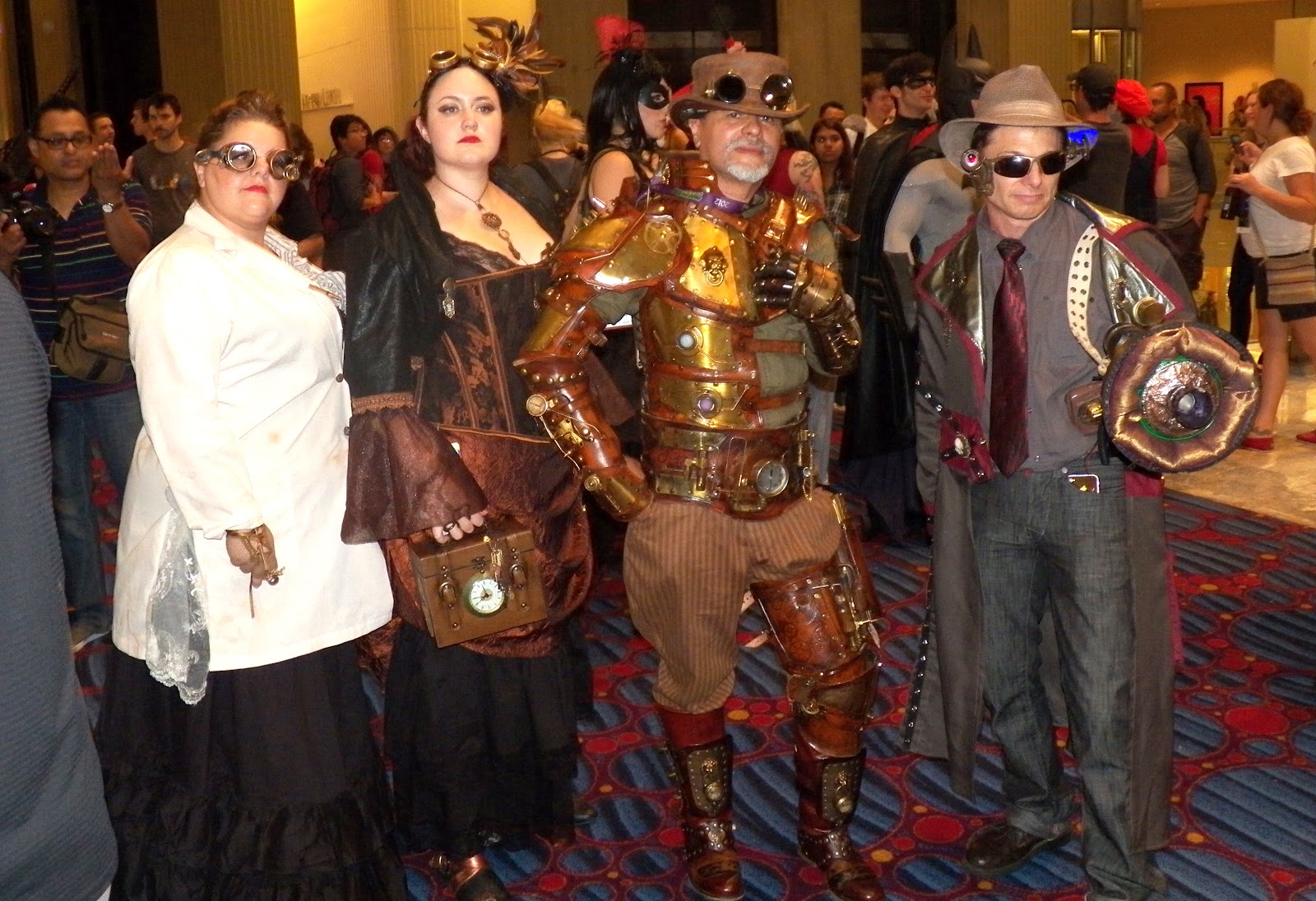 I left after the movie, and I'm recovering today. New goal: Save money and go for multiple days next year. Maybe then I can actually make it to a writing workshop or panel. You know, cause I'm a writer and should have done that...
Posted by Angela Campbell at 5:25 PM 1 comment: