It's release day for "Something Wicked"!!

I'm passing out virtual candy and party favors today. What do you want? Snickers? Hershey bars? Gummy bears? Here, have some. Calorie-free, I promise!

Yes, I'm giving out candy because it's Halloween, a holiday I love, but also because it's release day for Something Wicked, the second book in my psychic detective series. I am so excited for people to read this book because I had so much fun writing it. This time Alexandra King gets her story, but don't worry, the same characters from book one make cameos, including my feline and canine sleuths Abbott and Costello (and I'm still donating proceeds to my local animal shelter, by the way). 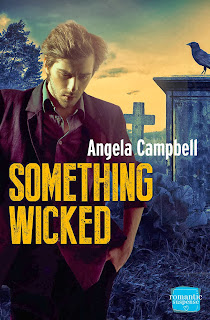 Something wicked this way comes…

All homicide detective Dylan Collins wants is a few hours of pleasure to take his mind off of the case haunting him. A serial killer is stalking the streets of Charleston, SC – a killer who calls himself The Grim Reaper. When the woman he'd just spent the night with turns up and offers her services as a psychic consultant on the case, his ardor quickly cools. Last thing he needs is to get tangled up with a con artist.

It doesn't take long for Dylan to realize Alexandra King is the real deal – and the killer's next target. Dylan's protective instincts battle his reluctance to get too involved with a woman he isn't sure he can trust. As they get closer to finding the killer, they also grow closer to one another, but will Alexandra's secret agenda destroy their chance at happiness – if the killer doesn't strike first?

I have to admit, I never planned to write this book. Truth. It wasn't until I was more than halfway through writing On the Scent, and had written myself into a corner I couldn't figure out how to get out of, that I threw up my hands and backed away from it.

And turned on the TV.

It was a Friday night, and I channel surfed right past The Travel Channel, then backtracked to see what those crazy guys from Ghost Adventures were doing that night. A new-to-me show called The Dead Files came on next, and I immediately perked up. A psychic medium partnered with a NYC homicide detective to investigate a haunting? I was intrigued. Intrigued enough to realize that a spunky psychic medium would fix my plotting problem for On the Scent. And suddenly Alexandra King's character was born and that corner I'd written myself into became a nice, cozy writing nook where a sexy homicide detective named Dylan Collins (who favored Ian Somerhalder in my mind's eye) also came into being.

Alexandra's character was never planned. She just happened, and suddenly I enjoyed writing her scenes so much, I knew she had to have her own book. Honestly, it was as if so many plot points came together on their own to make that happen--it felt destined, as corny as that might sound. And Something Wicked is probably the easiest book Ive written yet because of it. I honestly have no idea if it's as good as I think it is, but the feedback so far has been encouraging.

The fact the story is being released on Halloween is only fitting, since I love the holiday so much and the story provides a great ghost story for the occasion. Please join me in celebrating Something Wicked's release today! Grab some punch, pull up a chair, and get ready for a fun, spooky read.

It's time for a cover reveal!

With the assistance of the lovely Giselle from Xpresso Book Tours, I'm having the cover reveal for Something Wicked today! An incredible number of book bloggers graciously signed up to help us with the reveal, and I'd like to thank them all  by directing you to their websites below. It's been a crazy busy couple of weeks for me, so I'm still working on updating my website. I'll have the cover up soon. Promise. In the meantime, I encourage you to stop by these wonderful websites to see the cover of my newest book, which releases Oct. 31! This is book 2 in my romantic suspense series, and if you like the cover, please leave a comment thanking the site for revealing it!

Personally, I think it's a wonderful, atmospheric cover. Alex at Harper Impulse always does a fantastic job with covers. Thank you, Alex! What do you think?

Posted by Angela Campbell at 2:30 AM No comments: