Happy birthday, Superman, from the little girl you taught anything was possible 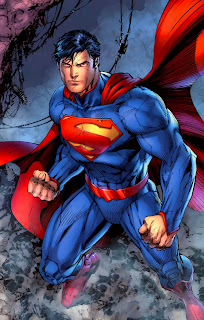 I’m pretty sure I must have been about 9 or 10 the first time I saw “Superman: The Movie.” We had just gotten HBO, which was super awesome and very rare back then, being the early 80s and all, and it was the first movie my mother allowed me to watch on the channel.

I snuggled up on the end of the sofa with my faithful sidekick, an orange and white tabby named George, and stared in awe at the television for two hours.

Christopher Reeve made that wide-eyed little girl that I was truly believe a man could fly. And if a man could fly, surely a man could do anything, right? I'm convinced CR and Superman opened my imagination wide that day and it never really shut.

Yes, I found a red towel and pretended it was my cape and kept jumping off the sofa trying to fly until I eventually hurt myself, but a seed was planted in my heart that day that took root and grew as I grew older. The worlds I created in my mind...the characters and the scenes...

With hindsight, I think “Superman: The Movie” impacted me far greater than any movie probably should. And I’m very glad Superman was a good, solid, old-fashioned type of hero, because I still believe he’s been my biggest (fictional) role model in life, ranking up there with my parents and Jesus.

I grew up in a house with three older brothers, no sisters, and with very strict, old-fashioned parents, so I was a bit of a tomboy. My mother was a stay-at-home mom who depended on my father for everything. She didn’t even have a driver’s license! I thought Superman was the coolest dude ever, but Lois Lane was something else.

You mean a woman could be bold and brass and kick butt, too?

Suddenly I went from wanting to be Superman to wanting to be Lois Lane, because, honestly, how cool is she? Plus, she was Superman's girlfriend, or sort of girlfriend at the time, and that was wicked better.

Lois and Clark were newspaper reporters, so I joined the student newspaper staff in middle school. Know what? I loved it. That's where my love of using words to create began to develop into a real career.

When I went to college, I studied journalism with an emphasis on newspapers. One of my first nights in the dorm as a college freshman, guess what TV show premiered on ABC? “Lois and Clark: The New Adventures of Superman.” I took it as a sign from the universe — a kind of wink, wink, kid, you’re on the right path sign. It was my first time away from home. I was scared, alone and feeling sorry for myself since my roommate hadn't yet arrived and I was too shy to venture out and make friends of my neighbors. The actors at the time were new to me, but the characters of Lois and Clark were old and familiar friends. They comforted me and helped make that first night away from home not so bad. Whenever someone would make a comment in class and call me “Lois Lane,” I secretly thrilled to the idea inside. Honestly, what female reporter or journalism student hasn’t been called Lois Lane at some point? Isn't it awesome?

I admit I’m a total fangirl and go ga-ga over all kinds of SF/F things — Twilight, Doctor Who, The Hunger Games, Star Wars, True Blood, Vampire Diaries, Buffy the Vampire Slayer, etc. — but there’s nothing I fangirl over more than Superman.

Even when Batman hit it big and people called Superman lame, I still preferred Superman. He is light and hope and always does good, no matter what, whereas Batman can sometimes have questionable morals. I'll never understand why people call Superman lame for that, but whatever.

I own all of the movies, all of the TV shows (even the animated ones), have a crate full of comics, action figures, t-shirts, and toys. I cried — no lie — when DC Comics launched the New 52 and relaunched Lois and Clark, effectively ending their marriage. I haven’t been able to bring myself to continue reading the New 52 for that reason.

Lois and Clark: Best couple EVER.

Since he’s celebrating his 75th anniversary today, I couldn’t let the day pass without giving Supes a shout-out on my blog. And Lois, too. Maybe it’s kind of sad that I still love him, them, so much, and I’m pretty sure he’s one of the reasons I’m still single well into my 30s. You know, normal guys just don’t compare to Superman, and I have always had a mad crush on Clark Kent. When I met Dean Cain at DragonCon last year, I swear to God I almost passed out when he hugged me. Words couldn't even convey to him what his portrayal of Clark-Superman had meant to me.

When Warner Brothers premiered the new trailer for “Man of Steel” yesterday, it was the highlight of my week. And I’ve watched it over and over and over again already. I have high hopes for it, despite my misgivings. I’m already madly in love with Henry Cavill, and Amy Adams looks kickass as Lois Lane.

So, happy birthday, Superman, and thank you.

Thank you for making a little girl believe a man could fly…and do anything if he or she put their mind to it.

My writing efforts have seriously been derailed lately because of one thing or another, but I’m feeling that itch to finish my current manuscript — the one about the psychic medium investigating a serial killer in Charleston, South Carolina — because all of these other ideas keep coming to me that sound awesome to explore.

My mind has been scattered ever since I found out my kitteh sidekick, Dusti (or DustiAnna as I sometimes call her), needed a dental procedure to remove a tooth. She had the surgery, but they actually found five teeth that needed to come out. Five! They removed the three worst ones on one side of her mouth, but she’s still gotta have surgery next month to remove two on the left side. I've been a nervous kitteh mom wreck for about a month, since I first learned she needed this, and it threw my imagination and motivation to write all out of whack.

Yesterday, I took her for her one-week followup. The senior vet in her practice did the surgery, so I met with him. He’s a delightful, seemingly grumpy ole fellow who dresses funny. Long story, but I ended up back in his surgery clinic to fix his computer. While I was there, I couldn’t help but take in the small, cramped space and all of its many gadgets. My mind immediately went to “Is this what the dissection rooms in alien spaceships look like?” I think so. And I started imagining what all of those strange instruments did. I blame Mulder and Scully for this.

That was the first sign my writing mojo was coming back.

Today, I was reading the blog post at Here Be Magic by Veronica Scott, about the sinking of the Titanic. This got me to thinking about a little known fact: my birthday is April 15. The day the Titanic sank. It’s also the day Abraham Lincoln died, and of course, it’s tax day. I’m one more in a long list of tragedies. I’m really over the whole birthday thing — I stopped counting how old I am when I hit 35 back whenever that was — but I have to admit when my birthday rolls around, I do find it kind of cool that I was born at exactly 4:15 p.m. on 4/15/I’ll-never-admit-the-year. A psychic’s spam sent to my inbox every so often assures me there’s a cosmic significance to that fact and that I am, in fact, destined for great things because of it. I’m wondering when my superpowers will kick in, because they haven’t yet.

Now I’m thinking of all kinds of ways to work this into a plot.

Point is, if I can find inspiration to write from something as dreaded as my own birthday, I’m a happy gal. My writing mojo is starting to flow through my veins again. Oh, how I’ve missed it so…

Posted by Angela Campbell at 12:00 PM No comments: