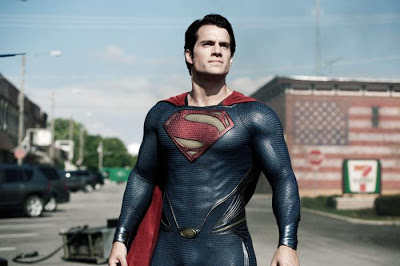 I poured my heart out to the world wide web several weeks ago about how much the character of Superman means to me, so you had to know I was going to follow it up with a review of "Man of Steel" after I saw it. And saw it, I did! I got my Walmart "see-it-first" pass the morning they went on sale. I was at the theater by 5:45, first in line I might add, to see it Thursday night. Eager much? Yes. Yes, I was. I'd probably have gone to see it at midnight too if I didn't, you know, have to work Friday and all. Don't be surprised if you see me at an IMAX theater this weekend catching a second viewing.

Now, to get to the point. What did I think of it? With an intro like that, you think I loved it, don't you? Whoa-ho-ho. Not so fast, Sherlock. Warning: This post might contain some minor spoilers. Read ahead at your own risk.

Honestly, I'm still processing my reaction to "Man of Steel." Did I love it? I'm not sure. Maybe. Did I hate it? Some parts, yes, with a violent passion. Would I recommend you go see it? Abso-freaking-lutely! Superman needs the support!

To put it short, there were some things about this movie I loved, loved, LOVED, and some things that irked me beyond belief. I mean, I wanted to pull my hair out because of these things. Throw chairs at people. Buy a plane ticket to California and punch director Zach Snyder in the face. That's how much they irked me.

First, the things I LOVED about this movie.

Henry Cavill as Superman and Amy Adams as Lois Lane. They were phenomenal in their roles. Henry was born to play this part based on looks alone. Plus, I want to have his babies. But mostly, he owned the role from beginning to end, especially considering he didn't have much to work with. And Amy Adams. Oh, you brilliant, wonderful woman! She was a kickass Lois Lane, and I was worried before at her casting. I was, but not anymore. Nope. She was AWESOME. This one scene where she escapes from Zod's spaceship was...I loved that scene. In fact, the entire Clark/Superman/Lois storyline was handled very well. It didn't hold to most of the traditional Superman canon, but that's okay. I was fine with it. It makes sense the way they handled it in this day and time. And Henry and Amy as a team had great chemistry. The romance wasn't a focus, but the classic Lois/Clark teamwork was there. Such a relief!

The story. I thought the story was decent and reminded me of all the things I enjoyed about "Smallville." Seeing how Clark was raised. Understanding why he's such a good person. Leading up to how he transforms into Superman and giving him a reason to defend Earth. Unfortunately, it also reminded me of all the things I disliked about "Smallville," mainly ridiculous plot lines (terraforming the earth — really, David Goyer?).

The special effects. Praise heaven, the CGI was at a bare minimum and the special effects, for the most part, were really, really good. When Superman flew, it looked real. The beginning of the movie is set on Krypton, which is something we've never seen in live action film before, and there were some wonky special effect things going on there, but overall, it was cool to see the planet brought to life.

The action. There was plenty of action in this Superman film, that's for sure. A complaint of previous films was "not enough action!" You won't hear this now. Superman throws punch after punch after...you get the idea.

Russell Crowe. This is a hard admission for me to make. Russell Crowe has always been one of my least favorite actors. If he's in a movie, I usually refuse to see it. When I heard he was cast as Jor-El, I gave a mental fist to the air and thought-cried "Noooooooo!" But Russell Crowe was very well cast in this role. He played the part well. I (gulp) actually liked him. There, I said it. Now, moving on.

The ending. The last scene of this movie almost moved me to tears and I'm pretty sure I had a nergasm watching it. Then again, it doesn't take much where Superman is concerned.  :)

The things I HATED about this movie.

For the love of God, Zach Snyder, can you please make a movie without stripping it of all color, giving it a dreary gray overcast, and making me feel like leaving and checking into a mental hospital because of its dreariness? This is Superman - the one superhero in the superhero universe who is all about light and hope and the sun! I felt like he grew up in Seattle for all of the grainy grayness in this movie. You certainly didn't do any of your actresses any favors either. The beautiful Diane Lane and Amy Adams both looked like they needed facials half the time because their pallor was so gray. Good grief. Way to ruin a fantastic movie.

The action. I loved that a Superman movie finally had lots of action, but come on. After a while it just kept on for no reason. It made no sense. I found myself wondering, "Why are they still fighting? Because they can? Oh, okay. I guess. Yawn."

The bad language. I know it's realistic and cool and edgy to have some bad language in a Superman movie, but there are kids seeing this thing, people. Granted, there wasn't all that much bad language, but enough that I noticed. Probably because the maybe-10-year-old next to me leaned over and asked her parent, "What's a dick, daddy?" after one particularly memorable line. Geez.

Speaking of, the flying penises. See the movie and you'll know what I'm talking about. The escape pods for Zod's people looked like flying penises. Jor-el's robots looked like floating penises. Kal-el's spaceship? Penis. Or maybe sperm. That one's a toss up. I'm thinking someone - yes, I'm looking at you Zach Snyder - has an immature fascination with a certain phallic symbol. Oh wait, or is it just me? Nope, my friend noticed the floating/flying penises too.

I have to pound on Snyder some more. I'm sorry, Zach Snyder, but you deserve it. I felt like I should have been a lot more emotional watching this movie than I was. Instead, I felt oddly detached, which is weird considering what a diehard fan of Superman I am. I'm pretty sure it was Snyder's crappy directing to blame again. The man has been well criticized, and not just by me, for making emotionally shallow movies. The emotion was there in the script, it was in the acting, but for some reason, it just didn't translate to the screen all of the times it should have. Amazing, considering what a great job the actors did.

Finally, one of the things that nearly broke my heart and made me want to punch David Goyer in the face (MAJOR spoiler here): Superman takes a life. Any true fan of Superman knows this is sooooo WRONG. Superman does not kill. That's one of his defining characteristics. And this, his origin story retold, has him doing exactly that. Made. Me. Want. To. Sob. This is where Goyer totally tried to Batmanize the movie, and I hated it.

Oh, and one last note: There is no teaser to another film or sequel in or after the credits. If you're dying to pee after 2 1/2 hours and risking bladder disease to stay and wait, you'll be kind of angry when there's nothing. Or so I hear. :)

I both loved and hated this movie. I have to give it props for not being as dark and Batman-y as I had feared it was going to be, but it was still far too dark and Batman-y to be a genuine portrayal of Superman. If not for the color-stripping and craptastic directing and that one major faux pas in the script, this movie could have been the best superhero movie I've ever seen. But it fell short of that mark. However, it has Henry Cavill in it, and I could just sit and look at him for hours. Especially when he's wearing a form-fitting suit like this one. And, um...what was I saying?

Did you see it? Am I being too hard on Zach Snyder?
Posted by Angela Campbell at 2:28 AM 2 comments:

Here's a silly video I made with my cat, Dusti. She likes to help me change bedsheets. Yes, I know they're tacky, but they were on clearance, so...shut up. Plus, ignore the messy room and hot mess of a woman.

Ever been here?
Posted by Angela Campbell at 8:00 AM No comments: