Doctor Who: I finally get it

Wikipedia tells me this is mostly an American term for fans of the British show DOCTOR WHO and since I am, indeed, an American, I'll own it. It's all Dragon*con's fault. I saw a lot of DOCTOR WHO cosplayers at last year’s Dragon*con and finally added the show to my Netflix cue to see what all the fuss was about. Before Christmas, I took the plunge and started watching it. The new series, that is.

Total Whovian now. In my head, I'm talking British. Entire conversations with myself, in British. Every now and then, mostly when I'm mad, I'll do Dalek speak and find myself saying over and over "ex-term-i-nate! ex-term-i-nate!" As if I weren't already weird enough.

Gotta admit I thought the show was "cute" and "quirky" the first season, but once David Tennant stepped into the Doctor's sneakers, I became obsessed!

I get it. I get what the fuss is all about. The Doctor is freaking awesome!

Warning to all non-DOCTOR WHO viewers: The following passage will sound like the ramblings of a totally demented person. It all makes perfect sense if you watch the show. Just go with it.

I just finished “The End of Time” episodes and am trying to move beyond being devastated (yes, I sobbed. I actually sobbed a lot. Don't judge) because actor David Tennant is no longer playing the Doctor. I mean, I teared up when Christopher Eccleston left as the Doctor. Sure, I cried a little when Rose left as the Doctor's companion, too. I was a little—okay, well, I was fine when Martha left—but I had to get out the Kleenex when Donna Noble seemed to be leaving the show. However, I full-on cried my eyes out and screamed "No, don't go!" and scared my cat by snatching her close for comfort when David Tennant's Doctor began to regenerate on my TV. Then I got angry. Really angry. You-wouldn’t-like-me-when-I’m-angry angry. Darn you, Tennant! Why did you leave?!?! Whhhhhyyyyyy?!?

I know from the cosplayers I saw that the new Doctor wears a bowtie and brown jacket, and I have no doubt I’ll like him once I bring myself to start watching his episodes. But I’m still mourning David Tennant’s departure. For legions of fans, he's been gone for years. But he and I only parted ways last night. I need time before I can move on. Maybe, like, an entire week. Yeah, I’m not sure I can stop watching for longer than that. Truth. Don't judge.

I think I'm going to have to work on a time-travel story when I finish my current manuscript. Or is that lame? I've already decided my hero will be British. And wears a trenchcoat and pin-striped suit and sneakers and...oh, wait. Yeah, I totally need to work on my hero, don't I?
Posted by Angela Campbell at 5:00 AM 2 comments:

I hope your New Year’s resolutions included reading more books because I have a great-sounding one to tell you about today. I should put a disclaimer on this by saying I’m pretty confidant this book is going to be great because I read Liz Flaherty’s ONE MORE SUMMER last year, and It. Was. Amazing. A real tear-jerker and ride on the emotional roller coaster, but a great book worth the tissues in the end. Trust me, if you like contemporary romances, that's a great one to load onto your e-reader. I haven't had a chance to read JAR OF DREAMS yet because it releases Jan. 14, but I've already got it preordered on my Kindle. Being a super nice person, Liz agreed to be my guest today for a Q&A to talk about her new release, JAR OF DREAMS. Please welcome Liz with hoots and hollers and comments below (don’t worry: you can win stuff, too). 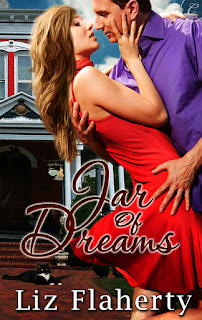 JAR OF DREAMS (from Carina Press)

For as long as she can remember, Lucy Dolan has been jotting down her hopes on slips of paper and saving them in a pickle jar—her jar of dreams. It was the first thing she saved when the beloved family diner went up in flames, and it’s safely buckled in her beat-up minivan when she lands in Taft, Indiana, to start over. She rents a room and goes into business with her landlady, but then Gert’s nephew comes charging in to “rescue” his aunt.

Boone Brennan will be damned if he’ll let Lucy take advantage of Aunt Gert, who raised him and his sister. Believing that she’s just passing through, he’s deeply suspicious of her—despite the sparks that fly between them.

Just as Boone and Lucy are starting to open up to each other, a series of fires throws Lucy under suspicion. Boone wants to trust her and his feelings, but with the whole town against her, will he stay by her side? Or will Lucy move on and find another place to make her dreams come true?


ANGELA: I have to start out by repeating again what a great book ONE MORE SUMMER was, even though you made me cry multiple times while reading It (darn you). Will I cry reading JAR OF DREAMS?

LIZ: Maybe a sniffle here and there, but JAR isn’t quite the emotional onslaught that ONE MORE SUMMER is—although I must admit I’m too close to my own stories to be sure about that. Boone and Lucy have both known some pain and they’re working their way out of it. I did suffer some with them, so the reader might, too.

ANGELA: Tell us about JAR OF DREAMS. Where did the idea for the story come from?

LIZ: I always get people first, so I wasn’t surprised when Lucy showed up in her rusty van, followed by Boone coming to her doubtful rescue—I thought maybe I had a road story coming on, which sounded fun to me. But then Aunt Gert and her beautiful old Victorian house came into the mix and things changed. Lucy had a lifetime of restaurant experience and Gert wasn’t ready to be retired. Before any of us knew what was happening, Tea on Twilight was open and serving delicious stuff. I love tearooms and Victorian houses, so I don’t know why I was so surprised!

ANGELA: Do you have your own jar of dreams? What would we find on the pieces of paper inside your jar if you had one?

LIZ: I don’t have a “jar of dreams” anymore—most of mine came true in the shapes of kids, grandkids, and Duane, my own hero, but I am a fan of the bucket list! It was parasailing in 2012 and I’m thinking zipline for this year.

ANGELA: What are you working on next, and when can we read it?

LIZ: I’m working on another story from Peacock, the setting of ONE MORE SUMMER, and I hate to say too much about it because every time I think I know where it’s going, it moves! I do have another book, A SOFT PLACE TO FALL, that will be out sometime in 2013.

ANGELA: Let’s get to know Liz the person with these questions. Are you a diehard member of any TV show/film/book fandoms? (If so, which ones and why?)

LIZ: Ah, I love THE WEST WING. I have all the seasons on DVD and go on binges where I sew and watch President Bartlett in action for hours at a time, particularly the first four years. Because the people on that show were so flawed yet so right. And because I just really like looking at Rob Lowe.

ANGELA: Who doesn't? That is one purty man. So, what’s the last book you read?

LIZ: Oops, let me check my Kindle…oh, yes, THE LADY’S COMPANION by Carla Kelly. I highly recommend it—or anything else Ms. Kelly writes, up to and including her grocery list and everything else we write on the backs of envelopes and stuff into our purses.

ANGELA: If you could spend one day as any fictional character, which one and why?

LIZ: Jo March from LITTLE WOMEN, because she came to know herself so well and lived exactly the life she wanted without ever hurting anyone. Only I’d want to be with her as opposed to being her. She’d be fun to go ziplining with.

LIZ: I want to look like Susan Sarandon—does that count? And Sam Elliot’s voice is the stuff my dreams are made of—I mention it in most of my books (although sometimes it gets edited out). And Tim McGraw can wear a cowboy hat in a way that no one else can, plus I love Alan Jackson and George Strait’s voices. And Daniel Day Lewis won my heart forever when he portrayed Mr. Lincoln. Not to mention, can you believe Sally Field? She was stupendous! Politics aside, I admire Hilary Clinton and Barbara Bush tremendously. And—

No. No, I don’t have any crushes. Thanks for asking.

ANGELA: Ha! Me either. Snort. Hobbies?

LIZ: I sew. I make lots of gowns and blankets and other things for area hospitals and the children’s hospital. When I retired from the postal service, the first thing on my aforementioned bucket list was making bed-size quilts for each of my grandkids (the Magnificent Seven) and I am on the seventh one. My daughter-in-law suggested that when I finish that, I should start making quilts for the grandkids’ parents, so I think I will. I love sewing. It soothes when my heart and soul are stewing about things they can’t control.

Thanks so much for having me here today, Angie. I’d like to offer commenters a chance at winning a teacup and saucer. All they have to do—aside from leaving their email address—is answer the following question: What soothes you best and fastest when life is smacking you around?

JAR OF DREAMS is available for pre-sale at Amazon or Carina Press. I hope you enjoy it. Have a great 2013!
Posted by Angela Campbell at 2:00 AM 17 comments: