Buy my book, save a wolf

It is hard to believe October is almost here, or that “Cry Wolf” will released in 32 days (not that I’m counting or anything).

I’m knee deep in promo stuff, and I’m also about three chapters away from finishing my next manuscript — and why yes, it’s also about werewolves, sort of. I’m starting to realize I can’t approach werewolves the way most romance authors do — or at least, none that I’ve read. For example, I put my profound love for wolves as animals to good use when I was plotting “Cry Wolf” and approached the werewolf subplot from a cryptozoology standpoint. Cryptozoology, in case you’re not familiar, is the scientific study of unknown animals — Bigfoot, the Loch Ness Monster, etc. I had a blast doing it too! If I were independently wealthy, I might find a Bigfoot or lake monster hunt and go on it! But that probably won’t surprise anyone who knows me because, well, I’m weird like that. I had some critique partners early one who asked me why I didn’t go the traditional woman-falls-in-love-with-a-tortured-werewolf route, and the truth is, I was having way too much fun writing it my way.

Hmmm. Maybe that’s one reason it took me so long to get this story published.

Anyway, I’m writing another story with werewolves attached — I’m sorry, I just can’t seem to help it — and it’s veering away from the norm too. And as I plan out my promotional strategy for "Cry Wolf" while thinking ahead to my next story, I've decided whether my books are a hit or a flop, I want to donate some of the proceeds from it to charity. But which charity? There are three I already support when I'm able - breast cancer research, animal welfare and the endangered wildlife fund.

I’ve read countless books on wolf sociology and biology and the such that keeps seeping into my new plot. In college, I applied for an internship to spend six months at the Wolf Education Research Center in Oregon. I’ve never visited the center, but I wanted to — very badly — when I was younger. The idea of pitching a tent and observing wolves up close for scientific study appealed to me more back in those days than writing, filmmaking or, shoot, probably eating — three things I love to do now.

Point is, I've decided I will donate a portion of my first month's proceeds to the Wolf Education Research Center. Most likely, I'll donate to a different charity each month as my book sells. Check back here to see which charity I'll be donating to - and which you can help me donate to by buying my book!

In the meantime, I’m trying to tell myself my next story can’t be about wolves in any shape, form or fashion. That sucks, cause I already have an idea for a story…and guess what? There’s a werewolf involved. Go figure.

Posted by Angela Campbell at 6:29 PM No comments:

It’s been a while since I’ve been able to update — I blame my pesky little day job this time, but I wanted to thank everyone who voted for me in Maggie Shayne’s video contest. I placed second! I didn’t win the Kindle, but I did win her complete series in e-book — so naturally I had to go straight to Amazon and buy a Kindle so I could read them. So far I’m loving it. So many books, so little time to read them…

Check out Maggie Shayne's final book in the Wings in the Night series, available for pre-order on Amazon.com.

Posted by Angela Campbell at 6:24 PM No comments:

Got my cover. Yay! 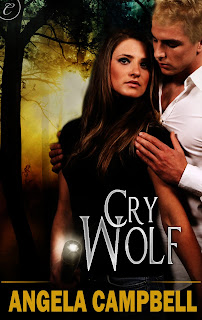 It’s hard to believe that in less than two months from now, my debut book will be available for purchase through Carina Press! Things are starting to speed up with that process, and I just got my book cover at the end of the week. I’m posting it below — what do you think?

I’ll be sending out ARC’s soon to reviewers. I was reading over the files last weekend. Am I the only author who has gotten to this stage, only to be riddled with doubts? What if people hate my story? What if people think it’s stupid? What if the publisher decides, last minute, not to publish it after all because they’ve realized, “Oh, wait. This is crap. Nevermind!”

Oh, the insecurities of being a writer. You gotta love it.

Want to know what happens when a geek author goes to DragonCon?

I make no secret of the fact I’m a total fangirl and geek at heart. I know far more than a person should admit about Superman and Star Wars mythology. I have spent probably a good portion of my young life glued to the boob tube ooooh-ing and ahhhhh-ing over shows like “The X-Files,” “Supernatural,” and “Buffy the Vampire Slayer.” Oh yeah, and there’s my newest obsession — “True Blood” and Eric Northman. Yum.

I’ve wanted to go to Comic Con and DragonCon for years and years and years, but I always get the same response from my friends. “Ewww. No, Angie. No.”

I finally decided, to heck with it, and I made the journey alone to Atlanta for a day this year for the 25th anniversary of DragonCon. I did it under the pretense of research. You know, because they have authors who attend DragonCon for signings and stuff.

DragonCon is the southeast’s largest comic book/sci-fi/fantasy/gaming convention. Yes, it would be fair to imagine me rubbing my hands in delight and drooling over the schedule. It’s true. I embarrass even my cat. Poor kitty.

After my day-long adventure at this year’s DragonCon, I can now safely say that you haven’t lived until you’re hanging on a street corner waiting on the light to change behind a Jack Sparrow and wedged in between a Gumby and a chick poured into a leather X-Men costume that looks dangerously close to popping off her.

I swear I tried to play it cool by walking around in my plain clothes, pretending I was just a causal attendee, but I just couldn’t stop myself from stopping and staring in fangirl delight whenever I saw a Stormtrooper walk past me, or hey, wow! Look at that epic Sailor Moon costume over there! (Jumps up and down with delight)

By the skin of my teeth, I managed to squeeze into the Q&A panel with “True Blood” stars. I mention this only because Ms. Charlaine Harris, author of the Sookie Stackhouse books, was also on the panel. Yes, I fangirl over authors too.

It warmed my heart to see so many DragonCon guests asking Ms. Harris questions instead of the actors. Authors rule! And it made my heart leap with joy when Ms. Harris responded to one person’s question by saying, “My first book in this series was rejected 10 times before anyone wanted to publish it. Now when I think of those 10 publishers, I wish I could tell them —“ pointed at the actors beside her “— ha ha!”

What kind of world do we live in if even the Sookie Stackhouse books were initially rejected?!

Needless to say, I had a blast at DragonCon, and I can’t wait to go back next year. Wouldn’t it be wonderful if I could round up some fellow fantasy/paranormal authors to go with me to do a group booksigning?

That reminds me, if you haven’t read Abby Niles’ book “Defying Convention,” you are missing out. I laughed so hard before I could relate, and yes, I am gonna have to go back and read it again now that I’ve actually been to a convention. I'll probably be in stitches!

Posted by Angela Campbell at 7:12 PM No comments: