For anyone who might have wondered what happened to me, well, I'm still kicking around. It turns out 2015 has not been the best year for me, writing-wise, because of numerous personal reasons I won't get into here.

The good news is that I am writing again and working furiously to finish the fourth book in my Psychic Detectives series. Fingers crossed, that manuscript will be winging its way to my editor's inbox soon. It has been an interesting journey with many rewrites, so I hope Connor's story entertains you once it makes its way into the world.

I've also written a novella that, fingers crossed, will be released in November. It's not related to my Psychic Detectives series, but it follows the same theme. It features a hunky psychic working to solve a serial killing mystery. It's a little darker than anything I've written before, but I'm proud of it because it helped me get past a bad case of writer's block. It also might feature a cat because every story needs an animal in it, don't ya think? More on that novella coming soon.

In the meantime, Halloween is right around the corner. Ah, candy corn, pumpkins, and spooky and not-so-spooky costumes. It's probably my favorite time of year, or a close second, so I'm excited. Grab a book or scary movie, relax, and have a safe and happy Halloween! 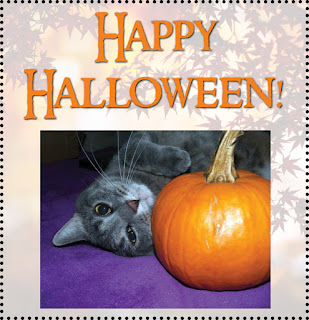 Posted by Angela Campbell at 2:55 PM No comments: