First of all, major apologies for not posting any updates in a loooooong time. I believe 2017 saw 2016 as a challenge, and it gladly accepted the challenge to try to be THE WORST YEAR EVER, at least for a lot of people, including myself. Someone needs to face-punch and gut-kick 2017 for being such an over achiever. Anyone have Jean Claude Van Damme's number?

I'll get real for a moment. I almost lost my father a few times starting in November 2016. He spent nearly three months in and out of the hospital, and I know on at least three occasions, the doctors told us to start preparing ourselves and that we needed to call in hospice. My dad is a tough one though, and he's still here. He has interstitial lung disease, including pulmonary fibrosis, so his prognosis isn't good, but he's still here. At the same time I have been dealing with caring for an aging parent, my day job decided to toss dodge balls at me because, why not? First, there were layoffs that hit my department. I got a pseudo-promotion, which basically meant I was put in charge without extra money or an official title and with less staff, so I have had that extra pressure. Then, my beloved furball Dusti got very ill. She went from being a spoiled fat 16-pound kitty to a barely 7-pound kitty who wouldn't eat and vomited every time she did try to eat. We've been trying desperately to get her healthy again. I have vet bills coming out my ears, and after three different vet consults, the determination is that she has either GI lymphoma (cancer) or irritable bowel disease. I can't afford the biopsy and don't want to put her through the trauma of one anyway, so we're treating it as IBD hoping she will improve. She has good days and bad days, but if she begins to show signs she's suffering, I will have no choice but to let her go. I haven't even had to make the decision yet, and I've been an emotional basketcase about it off and on for weeks.

So, that has been my year in a nutshell. Occasionally, I will get a message from a reader asking, "When is your next book coming out?" I want to be honest and say my writing has taken a back seat given everything else I've been dealing with. Surprisingly, I am still writing though.

And then this happened. 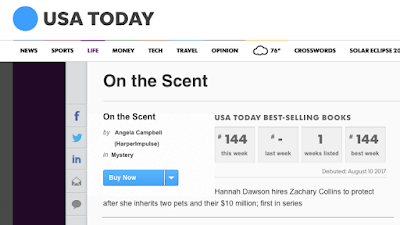 It's been a few years since ON THE SCENT was released, so I never expected it to end up on USA Today's Best-Selling Books list, but on Aug. 10, 2017, it did — thanks to a boost in promotion from my awesome publisher, Harper Impulse/Harper Collins.

All I can say is, thank you! To everyone who has purchased the book, a huge heartfelt thank you. And to everyone who has read and reviewed the book, I can't express my gratitude enough. To my amazing editor, Charlotte Ledger, a sincere and ginormous thank you. And to my wonderful critique partners, Pamela Hearon, Abby Niles, and Cynthia D'Alba — I owe you all kidneys, but since there's three of you, I might be in trouble. Will you accept having pets named after you instead? Just asking.

I've had an influx of messages the past week asking about a fourth book in my psychic detective series. Yes, yes, yes, I still plan and hope to publish Connor's story. However, I started a new story — completely unrelated to this series —as a way to get me past the wall I hit with Connor's story. I hoped by starting something new and walking away for a while, it would help me return to Connor's book with a fresh perspective. I am enjoying writing the new book — it has been good therapy for my bruised soul — and all I'm willing to say about it at this point is that it is a rom-com, it features a furry cast of supporting characters, and it's set at an animal shelter. I can't seem to get away from writing about cats and dogs.

This post turned out to be a lot longer than I planned. After all, I should be writing about sexy men wooing awesome women with the help of four-legged critters.

Thanks again, and please hang in there with me. I'm dodging these rocks life keeps throwing at me with pen in hand, so to speak. Hopefully the next news I publish will be an announcement about a publication date for one or both of my next books!

Posted by Angela Campbell at 5:03 PM No comments: