In two days I will be headed to Atlanta for my annual journey to Dragoncon, but this year will be different. For one, I'm staying multiple days rather than driving in for one day only; two, I'm staying in a host hotel (don't even ask how I pulled this off); and three, I'm not going alone. My niece Brittney and her boyfriend are meeting me there. Considering I've never met the boyfriend, it will be interesting for sure. I'll have to try very hard to rope in my geekiness so I don't totally embarrass the girl. At least I'm not cosplaying, because I'm sure she would die if she had to introduce him to her Aunt Angie dressed as Wonder Woman or Supergirl. I'm tempted to do it, just for humor's sake, but...not enough time, money, or dieting to pull it off at this point. Heh.

I've been looking forward to this trip all year, but I've had so much insanity happening in my personal life these past few weeks, my enthusiasm has waned a little. My father has been experiencing serious health problems, we went through another round of layoffs at the day job, and Sunny, the dog who inspired Costello, has been really sick and needs surgery. All very stressful things. I have no doubt that once I get to Atlanta Thursday afternoon and start seeing zombies roaming the streets alongside Captain Americas and Stormtroopers, my mood will lift considerably.

Don't worry. I plan to live tweet and blog all about my geeky fangirl experiences again this year and I'm taking my new camera to capture tons of pictures of cosplayers and celebrities. Thursday can't get here fast enough...

In the meantime, you can read my previous year's adventures at Dragoncon here:

2011:Want to know what happens when a geek author goes to Dragoncon?

It all started with a phone call from my friend.

“Are you sitting down?” she asked me. Of course I was. “They just called me, and I won the Ultimate KISS Experience from the radio station!”

Basically my reaction was, “Ha ha. Very funny.” Because I thought she was kidding.

But, no, she wasn’t! She actually won a VIP meet and greet with the members of KISS and tickets to the concert. I only believed her after I saw her name as the winner posted on the radio station’s Facebook page. Seriously. Things like that just don’t happen to her. She has the worst luck of anyone I know.

I should back up and note that we’d wanted badly to go see KISS in concert near our hometown, but a few weeks ago she’d ended up in the emergency room, her dog Sunny (the adorable critter who inspired Costello) ended up at the vet the same day with a serious back and neck injury, and I had to loan her some money to help pay for it. Hence, neither of us could really afford KISS tickets right now. That’s why she was trying to win them from the radio.

I should also note that she has been a diehard KISS fan since she was 3 years old and first saw them in concert. She even has a cute picture of herself as a kid in KISS makeup and everything. And several years ago we got hooked on A&E's Gene Simmons Family Jewels. Not even kidding, we LOVED that show.

The concert started at 7:30 p.m. We were told to be at the amphitheater no later than 4 p.m. When we got there, the radio station guy, Roy, hooked us up with the KISS roadie in charge of the VIPS. I’m not sure if his name was Davy or Robert or what, because Cindy and I both thought his name was something different. He turned out to be cool, and gave us two extra t-shirts in exchange for us giving him one the radio station had given me. And he kept coming over and chatting with us.


We got everything the KISS VIP fans pay $1,250 to receive — a limited edition KISS t-shirt, collectible guitar pic, tote bag, autographs, an intimate acoustic performance by the guys before they got into makeup, and professional pictures with the band in makeup along with gold circle seats to the actual concert. That’s right. Whoa, mama.

There were about 20 people there besides us, meaning those 20 or so people had popped out $1,250 for the same experience we were getting free. I can’t even.

Anyway. We were taken to a special VIP tent where we got our free stuff, and then we sat down to wait for the guys to come out. My friend asked me if I had any of my “author” business cards with me — ones I had made to promote “On the Scent.” She said “I’m gonna pimp out your book.”

“What?!?” Yes, I am your typical introverted author who sucks at self-promotion. I was a little horrified by the thought of this, but I gave her some cards anyway.

They got there around 5 o’clock or so and launched into a really cool acoustic set that included lots of joking and Gene tossing guitar pics at the ladies’ bosoms. Sadly, I was not dressed for that, plus I lingered near the back, being Ginormica and all. I can see over people’s heads a lot easier than they can see over mine.

After the mini acoustic concert, the guys went around to each of us and signed whatever we wanted them to sign. I got a tour program I bought at concessions signed by all four of them. 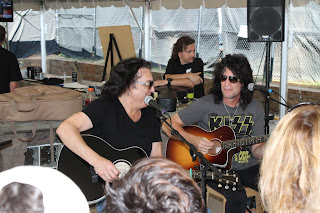 We didn’t say much to Paul — nerves, I guess — but when Tommy Thayer got to us, I bravely thanked him for coming to South Carolina and my friend asked him why on earth they’d chosen an amphitheater show in August in South Carolina. It was really hot and humid, and if I was sweltering, I figured they would be dying in their costumes. This broke the ice and we chatted with Tommy for a while. Eric Singer came over next and joined the conversation and signed stuff for us and then moved on while we were still talking to Tommy. Tommy was uber nice to chat with. Acted like we were all friends.

Next came Gene, and when my friend pulled out the Hello Kitty Gene Simmons vinyl figure AND The Demon POP figure AND a KISS CD AND…I don’t even know what else, he signed them all. While he was signing her stuff, she asked him about his dog, Snippy, who was often featured on Family Jewels. He told us Snippy was well, other than being 17 years old, and that his family now has six dogs.

I heard my friend say something along the lines of “I’m a bad mother because I left my dog at
home to come meet you, and he’s got a bad back problem right now.” She whipped out my business card. “This is him.” She pointed at him on the card. I think she might have made a comment that if Gene liked hot blondes, he would love her dog.

If you imagine me red-faced and dying of embarrassment, you’d be right.

Amazing enough, Gene took the card, chuckled and showed it to his handler. “Look at that. It says, ‘Do you mind if I hump your leg? That’s great.’”

My friend, being the aggressive marketer she is, then explained I was giving my proceeds to our local animal shelter and asked if he would “help us out” by telling people about the book.

Gene nodded and said, “Sure. Of course.” And tucked the card in his shirt pocket.

I have no idea what he did with the card from that point on, but I was kind of shocked he’d taken it.

He moved on to the next person, but you don’t know my friend if you don’t think she gave up that easy. Oh no. She got to the back of the line to wait for him again. Then she whipped out the pictures of her as a kid in KISS makeup and told Gene she used to be scared of him when she was little.

While she was talking, he reached over and took off her sunglasses. I think he was checking to see if she was on drugs or something. Poor guy. She was in that oh-my-gosh-Im-meeting-a-cool-celebrity-and-Im-both-nervous-and-excited-about-it-so-Im-talking-loud-and-fast phase. I know. I’ve been there. But I find this funny because neither my friend nor I drink alcohol. Drugs? Yeah, right. Not gonna happen.

After that, the guys were rushed off by their managers to get into makeup, and we had to go get our tickets. Very long story short, we eventually got back to our designated spot to have our pictures taken with the guys in full makeup right before they took the stage. I had no idea where to stand, and I felt like I was doing a weird kinda-bent-over pose. Heh. I think my picture turned out OK, even though I wish I’d moved to the middle for my solo picture. Whatever. It’s done.

We had pretty good seats close to the stage. Who forgot to put cotton in her ears and is kind of deaf today? This person. Me. I’m praying my hearing returns soon.

Basically, I’m too old now to rock and roll all night and then get up and go to work the next day.

But meeting KISS was awesome. Totally fun experience I’ll probably never have again. And who knows? Maybe Gene will spread the word about my book. That would be AWESOME. I only have my friend to thank for allowing me to share her one-in-a-lifetime experience. 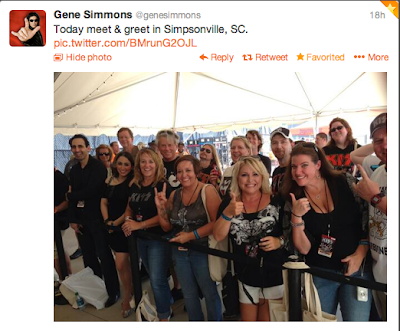 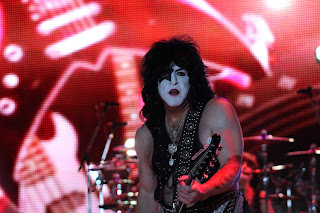 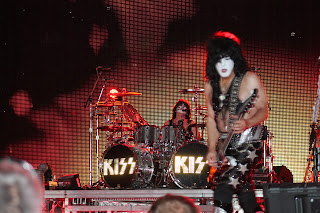 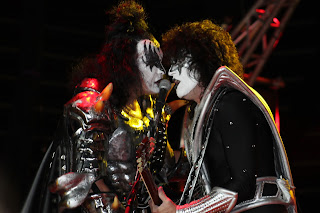 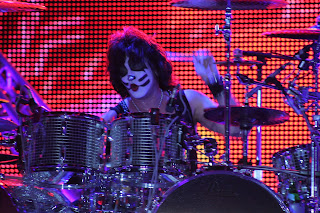 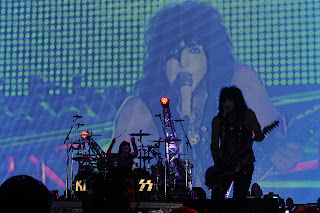 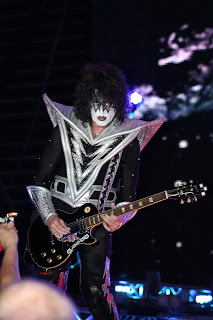 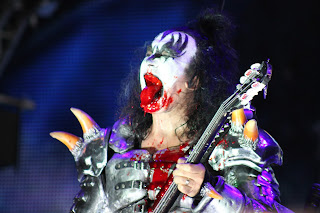 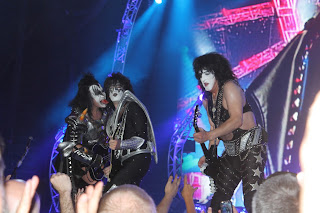