I invited author Ana Barrons to participate in the Tasty Summer Reads Hop, not realizing that Ana doesn't yet have a blog! So I invited her to share what would be her post on the blog hop here on my lil blog. Now I'm craving Italian food. D'oh! Thanks, Ana!

Betrayed by Trust, by Ana Barrons, was released on July 8! 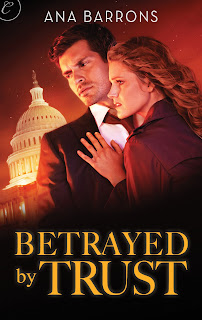 Catherine Morrissey is devastated when her sister’s body is found on a tiny wooded island on the Potomac. For months, Catherine had hoped that Blair’s disappearance would end with the bright, young Capitol Hill aide found safe and alive. Determined to put pressure on the police to catch the killer, Catherine flies to Washington, D.C.

Joseph Rossi, an investigative reporter for the Washington Herald, broke the story of Blair’s murder—and ruined his chances with Catherine in the process. They’d developed a warm, long-distance connection after Catherine’s sister went missing, but the temptation of the scoop—which revealed some Morrissey family secrets—was too great to resist.

Now together in D.C., Catherine and Joe are thrown into a world of lies, scandal and deadly political intrigue. They must work as a team and learn to trust one another—and their rekindled feelings—if they have any hope of living to see the truth uncovered.

1) When writing, are you a snacker? If so, sweet or salty?

Oh, yes, I have to snack, but I try to snack on healthy stuff. And I like to mix the sweet and salty—peanuts and raisins, or sliced apples with cheddar cheese or peanut butter. Yum! Or a bowl of cherries, grapes, whatever's handy. If I'm writing late in the evening I like to snack on Prosecco…and dark chocolate.

2) Are you an outliner or someone who flies by the seat of their pants? Are they real pants or jammies?

I don't really outline. I just write down story and character ideas and a general flow and then see where it leads me. When I'm writing I don't put on real clothes, so when I fly by the seat of my pants they're usually sweats or jammies.

3) When cooking or baking, do you follow the recipe exactly or wing it?

I cook kind of like I write—I have the general idea and then throw in ingredients without doing much actual measuring. Especially if one of the ingredients is garlic. Well, or curry powder. The more the merrier, I always say. (Gosh, I'm learning so much about myself!)

4) What is next for you after this book?

I'm working on a romantic suspense trilogy about two brothers and a sister, all of whom get the s*** kicked out of them in ways that make trusting a partner a real challenge.

5) Last Question...on a level of one being slightly naughty to ten being whoo whoo steamy, where does your book land?

Oh, it's much closer to a ten than a one, but it's not an erotica, so maybe a seven? It's definitely hot!

Here's my Italian mother's secret "recipe" (refer to Question 3) for spaghetti sauce, which Joe makes for Catherine in my book. ;)

This sauce needs to simmer for a few hours to bring out the flavor, so write on your laptop in between preparation and stirring. I usual dedicate the whole afternoon to sauce-making.
Turn it off when the sauce is nice and thick and smooth and delicious. Have a meal and save the rest!

Read my post for the blog hop here, and be sure to check out Ana's website or follow her on social media!
Posted by Angela Campbell at 12:30 PM