Book progress and my ramblings on 'Batman v. Superman'

First, I want to thank all of the amazing folks who have discovered my books in recent months. I continue to get emails asking when my next book is coming out, so I want to let you all know that I am working on it. To say 2015 was a rough year for me personally is an understatement, and 2016 has been no less challenging. That said, I am now working hard to finish Connor’s story in my psychic detectives series and get it shipped off to my lovely editor. I know I’ve said that before, but I am determined to get his story right, and that means I have had to do some massive rewrites because I wasn’t happy with the first draft I churned out. Don’t worry. I think his story will be better for it! Fingers crossed.

Now, I hope you’ll indulge me for the rest of this post, which will focus on my favorite guy in blue tights — Superman. I’ve declared my love for the superhero before and you can go back and read that here if you want. I also reviewed “Man of Steel” which still continues to get hits (why? I have no idea) so you can read that, too. 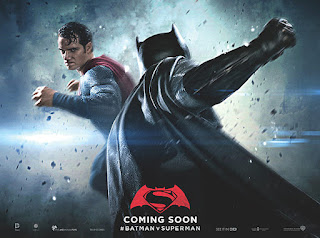 Obviously, I’m going to write about “Batman v. Superman: Dawn of Justice” too, and I thought it would be interesting to share my expectations before I see the movie. I’ll be posting a review, too, probably Friday morning so check back here for my spoiler-free reaction.

So, let’s talk about Superman and why I’m both excited to see “Batman v. Superman” and why I’m dreading it almost as much as that time my editor forced me to write a review of “Fifty Shades of Grey” the movie.

Here’s why in five words. The movie’s director, Zach Snyder. I was never much of a fan before “Man of Steel,” and I now dislike him immensely, mainly because anytime someone calls him out for ruining Superman’s character in “Man of Steel,” his argument is that he gets Superman better than the fans do. I mean, really?!? Really, Zach Snyder?!?

I'll break this down for you, Mr. Snyder.

Problem No. 1: My beef with “Batman v. Superman” is this in a nutshell. It is supposed to be the sequel to “Man of Steel,” meaning it is supposed to be about Superman, period. And what does Snyder do? He tosses Batman in there. I’m willing to bet without having seen “Batman v. Superman” that it consists of 75% Batman and 25% Superman. I’m sorry, but I just do not like Batman’s dark and dreary gloominess. I simply don’t. I liked The Lego Movie Batman though.

Problem No. 2: The problems I had with “Man of Steel” are likely to be amplified in “Batman v. Superman.” For example, Superman — and yes, I know, there are so many different lines of Superman in the comics that sometimes even in the comics this doesn’t apply, but — he’s good, optimistic, brings hope to people, and cracks jokes every now and then. Those are kind of his underlying traits.

Now, I love Henry Cavill to the moon and back, and I blame his version of Supes on Snyder, not him. But, for the love of all that is holy, Superman in “Man of Steel” was mopey, destroyed an entire city and then some, spent most of the movie brooding, and rarely cracked a smile. People feared him. They didn’t look to him in hope. I mean, he was gorgeous, but come on. The publicity photos from “Batman v. Superman” show this.

NO! For the love of kittens, Zach Snyder, NOOOOOOOOO!! That is not who Superman really is! Based on the trailer for this movie, he looks like he’s angry and more brooding this time around. What?!? I know Henry is capable of humor and smiling and looking like a fun guy because THIS:

That’s what we need to see more of. Instead of Superman glowering at Batman and Batman glowering back, I’d much rather pay to see this:

I mean, “Superman Returns” had its problems, but it was a much more enjoyable movie than “Man of Steel” and at least Brandon Routh had personality and seemed to be having fun with the role.

Problem No. 3: Wonder Woman. I have been waiting a lifetime to see Wonder Woman on the big screen. I’m actually excited to see what Gal Gadot does here, and I am so rooting for you to pull it off, girl. I really am. However, with Zach Snyder in charge, I imagine she will be dark and brooding and gloomy too. No. Just no. Plus, I am still disgusted she got thrown in like an after thought and will likely (I’m guessing here) only be in the movie for about five minutes. She deserves so much better than that. However, I’m excited a "Wonder Woman" stand alone film is coming and that IT IS NOT directed by Snyder. I'm excited that young girls and boys will have a new Wonder Woman to look up to — I simply hope she’s a worthy representation.

Problem No. 4: This movie looks like a mess simply from the trailer. If a better director had spent time developing Superman’s character, I might be OK with an action-packed beat-down between Superman and Batman. I’m wagering Superman and Clark get very little time to develop here. I mean, what’s going on? At least three or four plotlines, from what I can tell. I can't even.

I could go on and on, but I won’t. You get a slow hand clap if you’ve read this far.

So I’m expecting this to be my reaction when I leave the theater tomorrow night.

If a miracle happens and I actually leave like this instead, I’ll definitely let you know.

In the meantime, I leave you with a production I am certain will be much more enjoyable to watch than the actual "Batman v. Superman: Dawn of Justice."

Posted by Angela Campbell at 1:43 PM