Welcome to my mid-life crisis: Meet Chassis and PJ

You know how life takes you down paths you didn’t expect or even want to be taken down, and then boom, suddenly you find yourself hiding in the woods in the middle of the night with bugs flying around your face while you wait for a skittish cat to eat the sardines you've laid as bait in a cat trap?

So, here’s the thing. This year hasn’t been good for me. The past two, maybe three years, haven’t been good for me. I’ve overshared enough about them that this should come as no surprise to anyone who has ever read my blog. The bright spot — thank you publishing gods and Harper Collins and whoever kindly bought it— was seeing my book hit the USA Today best-sellers list last year a couple of years after it was originally published.

I also recently moved out of my childhood home (after my dad’s death) and into a new house, which I bought and everything, you know, to prove that I actually know how to adult. It’s a really cool townhouse that will probably look awesome if I ever manage to get unpacked. Ignore the fact I’ve lived there going on three months and have only unpacked two boxes. I know. Shut up. I’m working on it.

The point is, it’s really weird to find yourself at the lower end of 40 an orphan. I know there are people who are orphans much younger than that, and God bless them, because it’s unsettling and disorienting and awful. I lost my mom to cancer when I was 12, and while that was tough (to put it mildly), I’ve never experienced this feeling of …. I-don't-belong-anywhere … until now.

I’ve been trying to find my purpose in life again, which sounds like I’m suicidal or something, and I’m not, so please don’t report me. But after taking care of my dad for so long during his illness, I really don’t know what to do with myself. When I had no time between work and running him to doctors and fetching medicine and all of that, I would say, “I know someday soon I’ll have more time to write again and do fun stuff like travel and play with my cat.” Now that time has come, and I tend to find myself sitting alone in a recliner, shoving chips into my mouth while I binge watch Netflix in any free time I have. I should point out that since I bought my house, I’m working two jobs – a full-time one and a part-time work-from-home thing to pay the bills. See? I'm not a total lazy bum. Basically, I never sleep anymore. It's a problem, I admit.

Somehow — and I’m still trying to figure out how this happened — I also became a fully involved member of a cat rescue group in my area. I’ve volunteered and donated money and food at my local shelter in the past, done transporting, but never truly committed to one rescue group. I love dogs and cats, but where I live, the need to help cats is far greater than the doggies, so that’s how I lean.

Anywho. This chapter of my life all started with my best friend and soul sister, who called me because she saw a bunch of cats sitting in a restaurant parking lot. She has never owned a cat in her life. She is a bonafide dog person, but when she sees an animal in need, any animal, that animal will be saved or else. That was October, I think. Flash forward to today. We’ve trapped, spayed or neutered, and maintain around 20 cats at this cat colony. I didn’t even know cat colonies were a thing until then. Let me clarify that cat colonies aren’t small villages where cats dress in colonial attire, sing songs around campfires at night, and sell their wares at a tiny little bizarre in the woods. I know. I was disappointed to find this out too.


Cat colonies are clusters of homeless cats who tend to live and gather around sources of food — usually at the back of restaurants and businesses. Because they are not vetted or spayed or neutered, they multiply. Kittens pop up, and they usually get sick, infected, or killed before they have a chance to see their first month. This is why spay and neuter is so important. Please spay and neuter your pets!

My bestie contacted a local group because one of the cats she trapped was the friendliest thing. We deduced pretty quickly it had been someone’s pet, but since it wasn’t microchipped, it was probably abandoned or dumped there because of all the other cats. That seems to happen a lot too. Next thing we knew, we were a part of that rescue group. I was recently put on the board of directors, and I still don’t know how that happened. Wait, what? True story.

Welcome to my life. 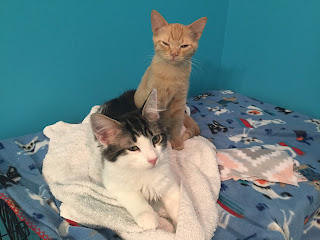 Also, meet my foster kitties, Chassis (pronounced Chassy) and PJ. We found these guys very late one night in the parking lot of a Taco Bell and T-Mobile. They were little bitty things, hissing and spitting and crying up a storm. Chassis almost met his untimely death inside the engine of an SUV (hence, the name Chassis, which is the part of the car he kept hiding on). PJ was crying nearby — stuck up inside that T-Mobile sign. We thought she was a he because ginger females are so rare, so we named her Papa Jr. after one of our colony cats we thought might be “his” dad. Surprise. She was a girl! So, we shortened it to PJ. She’s our little tomboy, so it fits.

They have been bouncing back and forth between my new place and my bestie’s for two or three months? My senior kitty Dusti is on chemo, and three vets discouraged me from letting her be around these kittens. But after about a month of living in a dog crate in my friend's bathtub, they had to come back to my house for various reasons, and now they are living in my master bathroom again. I was very nervous about this because Dusti is my child and takes priority, but so far, so good.

Well, except Dusti is not amused.

Although Dusti’s vets have recommended against it, I’m considering keeping these two furballs. I have no idea how I’ll convince Dusti to cooperate, but maybe. I’ve grown quite attached to these kittens, and even though we’ve been advertising them for adoption, no one has wanted to give them a home yet. They are so bonded, I would hate for someone to break them up. Chassis is bigger, but skittish. He hides behind PJ, who is his little protector. She’s not afraid of anything. I’m also certain her life goal is to be the star of a Cirque De Soleil show. You should see her jump! I’ll post videos. Wait until you see her in action!

OK, so I'm probably keeping them. I don't know how I'd give them up at this point. #FosterFailure

Anyway. My medication for a mid-life crisis seems to be cats. Heaven help me.

The good news? I think the version of Connor's story I'm writing now is the best one yet. It's flowing, feels right, and I think it's the one, y'all. Don't be surprised if two kittens named Chassis and PJ show up in it either.
Posted by Angela Campbell at 6:04 PM